Here we take a brief look into the centuries old history of the Nottingham caves.

Nottingham is a city which stands near Triassic sandstone which forms low hills to the north of the River Trent. The broadest of all these hills is where the original Saxon settlement had been and the higher hill towards the west had been occupied as the stronghold for the Norman’s in 1068. The Norman town had expanded until it was occupying a major part of the sandstone outcrop to the north of low cliffs and the bluffs which descend towards the Trent floodplain. The town grew a little more until the middle of the 1800’s.

The Triassic sandstone, which is locally called the Nottingham Castle Formation in the Sherwood San 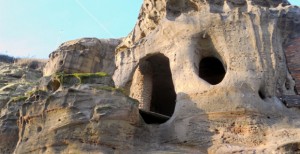 dstone Group has been distinguished by its high rock mass strength and low intact strength. It is very porous. The rock is notably free from significant joints too. This combination of minimal structural breaks and weak material makes the sandstone ideal as a tunneling medium. It is excavated quite easily and still manages to stand safely over unsupported spans.

This is probably why the earliest inhabitants of this region found it a lot easier to create dwellings spaces by excavating into the sandstone cliffs foot along the Trent floodplain edges. Even though Nottingham has been documented as the house of caves, there is very little that is known about the earliest cave houses. All of them have been destroyed ever since. Weathering has caused the degradation and retreat of the cliffs which is also matched by townspeople who cut back the profiles of the cliff. The newer caves had either been excavated behind the positions of the ones which had collapsed or had been removed as soon as they became unstable.

And there you have it. A brief look into these caves.