The Nottingham caves are really quite beautiful and are very well known all around the world.

The nature of these beautiful caves made them quite valuable to a few tradesmen like candle makers, bakers and blacksmiths. They could build hot 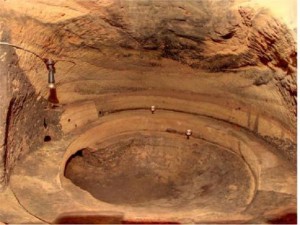 fires without worrying about their workshops setting on fire and without having to damp down or cover their fires each night as was required because of the curfew orders in place at the time.

Butchers and fishmongers built their workplaces there so as to take advantage of absence of flies and cool temperature. Even maltsters were able to use the cool temperature of around 53 degrees Fahrenheit to create malt from barley all throughout the year unlike competitors from other regions who were forced to wait till winter to do so.

There is a pub called “Ye Olde Trip to Jerusalem” which is rumored to be one of the oldest pubs in the country. Half of it has been carved from sandstone. It has quite a deep cellar too.

As the town prospered and grew, the old caves would get blocked up at times and then converted for other uses. Some of them became storehouses or vaults where people stored wool which was very popular in local markets. In many of them, some of the formerly elaborate details were hewn away so that the chambers could serve new purposes too.

Some of the caves were later acquired by wealthy owners who started working their whims into the stone. One of the stones were converted by a lace maker by the name of Thomas Herbert who carved summer house back in 1856 with balustrades, windows, arches, pillars and recesses over The Park & Meadows. This was converted into a grotto later on with the help of some petrified stone since its roof had already collapsed.