The city of Nottingham sits on a ridge made of soft sandstone which can very easily be dug using the simplest of hand tools for creating artificial cave dwellings. Indeed, Nottingham had once been called the Tigguo Cobauc which translates into the Place of Caves and it was called this by the Bishop of Sherbone Asser in his The Life of King Alfred around 900 AD. 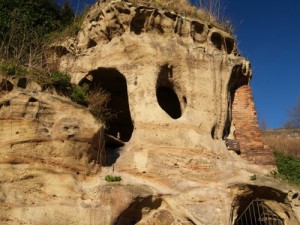 The caves located here had been inhabited from the 17th century onwards till at least 1845 when the renting of these caves and cellars for use by the poor as homes was banned. All of these caves are man-made and were cut into sandstone to be used as cellars, houses and places of work by various inhabitants of this city.

As of a couple of years ago, more than 540 caves have been catalogued in the city including more than 100 which were discovered only after 2010.

The building of the Broadmarsh Shopping Centre started in the 1960’s but the opening of these caves to the vandals and subsequent plans to cover them up with concrete led to a public outcry. There was a detailed study conducted of the caves by the Nottingham Historical Arts Society which led to these caves being called ancient monuments and all the developmental plans were then changed so as to preserve the caves.

They really are things of beauty and one could spend days if not weeks exploring the many caves in Nottingham. The attraction is currently being run by the Egalitarian Trust.