One part of the history of the city of Nottingham which many people may not know is the fact that there are more than 540 man-made sandstone caves beneath the city.

The ridge on which the city has been built is made of sandstone which was earlier called Bunter Pebble Beds. They were formed around 230 million years ago around the Triassic or Permian geologic periods. The stone is very hard and can make for a very reliable building material. At the same point of time it is also soft enough to be worked on with chisels and hand-held picks.

Unlike other sandstone areas, these caves weren’t created because of flowing water. For over a thousand years, residents from the area carved homes and stables horizontally in the cliffs and workshops and cellars vertically into foundations so as to create chambers that may be sturdier and cheaper as compared to the building structures overhead. The first mention of these caves was in the “Life of King Alfred” which was written by a monk back in 900 AD.

A number of the caves starte 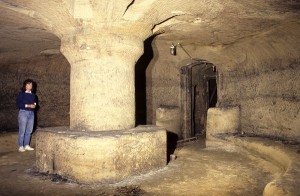 d off as wells since the sandstone was an excellent filter for creating cold, clear water. Unfortunately, residents didn’t really understand the porous benefits of sandstone and a lot of the wells were fouled soon after by garbage pits and nearby sewage.

But once the residents were aware of how easily the stone could be worked, they started created stairways, cellars and even rooms for a number of different purposes. Underground chambers were built for brewing and general storage too. They were used to store ale, as bank vaults, tanneries, wine cellars, live fish storage, etc. The County Gaol even dug caves to house prisoners. One of the Castle Boulevard complexes even had a chapel which was dedicated to St. Mary of the Rock too.